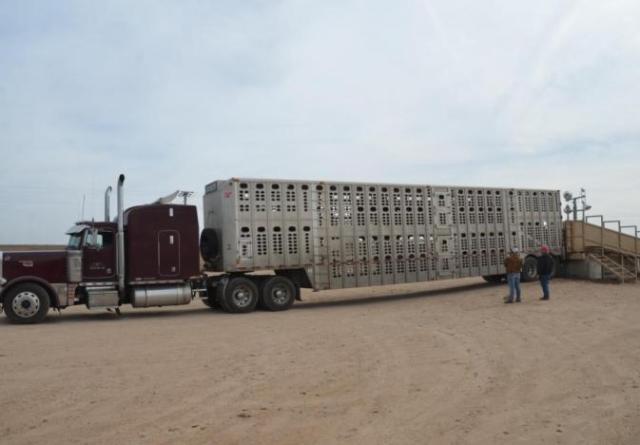 Wyatt Bechtel ( )
On Wednesday, Reps. Angie Craig (D-Minn.) and Lloyd Smucker (R-Pa.) introduced The Responsible & Efficient Agriculture Destination (TREAD) Act (H.R. 4919) that would give farmers and ranchers more flexibility when they are transporting live animals and perishable goods.
This bipartisan legislation would make it possible for drivers hauling live animals and perishable goods to finish their routes if they are within 150 air miles of their destination. The bill also allows this exemption to be utilized year-round rather than only during harvesting seasons.
“I’ve heard about the unique challenges farmers in my district face when transporting livestock, and the burdensome regulations that stand in the way of their businesses,” Craig said in a release. “This common-sense bill would allow agricultural haulers bringing livestock back to their farms to drive the hours and distances that make sense for them and their farms, and I’m proud to be leading this effort that is so critical to so many Minnesota farmers.”

Agricultural haulers – especially livestock haulers – face unique challenges that haulers in other industries don’t face, and this bill recognizes that need, National Cattlemen’s Beef Association President Jennifer Houston said in a release.
In Capital Update, the National Pork Producers Council (NPPC) said they support this legislation to provide regulatory relief to livestock haulers. Similarly, NPPC supports the Department of Transportation’s Federal Motor Carrier Safety Administration’s proposal to increase flexibility for truckers, including livestock haulers.
The Hours of Service (HOS) of Drivers proposal revises rules around the amount of time truckers can drive their loads and when they are required to rest between drives.
NPPC urged the agency to allow for other time splits for livestock haulers and eliminate the distinction between on-duty and driving time, among other suggestions in recently submitted comments on the proposal.